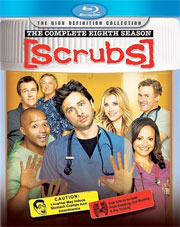 After a recent announcement of the DVD release of Scrubs eighth season on DVD, a Blu-Ray Disc announcement now makes fans happy.

After seven years on NBC, “Scrubs” made the jump to ABC for it’s most recent season, marking the shows first foray into high definition. This eighth season will come to Blu-Ray several months after the DVD release, but it will be a welcome addition for fans of the show nonetheless. Sitcoms have been sorely sadly absent from the Blu-ray world so far for some reason, but perhaps that trend can start changing.

The set comes with Deleted Scenes and Bloopers along with Alternate Takes a Featurette on the trip to the Bahamas and 12 Webisodes. For those counting, that’s two new webisodes exclusively for the Blu-Ray Disc set.