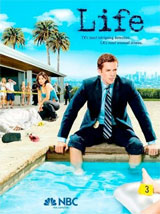 Universal Home Entertainment has slated the Second Season of the NBC TV series Life for release on DVD in August.

After spending 12 years in federal maximum security prison for a triple homicide he did not commit, former police officer-turned detective Charlie Crews (Damian Lewis) returns to the force after years in prison, with $50 million dollars from a cash settlement. He is a changed man with unconventional methods for solving crimes, a new spiritual outlook, a new partner (Sarah Shahi), and an underlying need for revenge.

The release will offer up all season 2 episodes in anamorphic widescreen with a Dolby Digital 5.1 audio track. In addition, the release will contain Commentary Tracks on select episodes as well as a few Deleted Scenes from the season’s episodes.