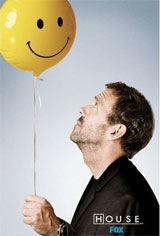 House wraps up its fifth season and celebrates with a DVD box set coming in August from Unviversal Studios Home Entertainment.

The set contains all 24 episode from the 2008-2009 season along with the Featurettes House Meets a Milestone: The 100th Episode, Keeping it Real: The Writers and Medical Consultants, Dr. Mom: Cuddy’s Storyline, Anatomy of a Teaser and Visitors to the House: Casting Guest Stars. Several episodes will also come with audio commentaries from cast and crew.

Although no Blu-ray of the HD show is coming yet, the DVD will carry a suggested retail price of $59.98 when it arrives on August 25th.