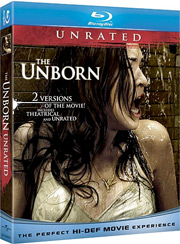 Universal Home Entertainment has just released details about the upcoming film The Unborn, arriving on DVD and Blu-Ray Disc in July.

Enter a world of unrelenting evil as terror finds a new form in “The Unborn.” In this shocking
supernatural thriller, a young woman, Casey (Odette Yustman), is plagued by chilling dreams and tortured by a demonic ghost that haunts her waking hours. Her only hope to break the debilitating paranormal curse is in an exorcism with spiritual advisor Sendak (Gary Oldman). See what lies beyond the doorway of our world in this non-stop nightmare of the undead….

The DVD version will feature an anamorphic widescreen transfer of the movie, complemented by a Dolby Digital 5.1 audio track. As an extra the release will also include some Deleted Scenes.