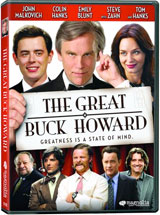 Magnolia Home Entertainment has added The Great Buck Howard to their release line-up, bringing the film to DVD and Blu-Ray Disc in July.

Buck Howard( John Malkovich), a mentalist extraordinaire, used to spend his days in the limelight. But nowadays, it’s clear to everyone but Buck that his act has lost its luster. Yet, Buck is convinced his comeback is imminent. With the help of his new personal assistant, recent law school drop-out and would-be-writer Troy (Colin Hanks) and a fiery publicist (Emily Blunt), Buck surprisingly lands back in the American consciousness, taking Troy along for the ride of his life.

Magnolia releases the film on DVD and Blu-Ray with identical bonus materials on both discs. As extras you will find a Commentary Track with writer/director Sean McGinley and actor Colin Hanks on the release, as well as a selection of Deleted Scenes. Outtakes and the Featurettes ”The Amazing Kreskin” and ”A Look at The Great Buck Howard” will also be included.