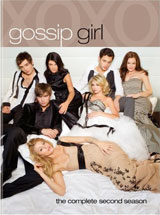 Warner Home Video has added the Second Season of Gossip Girl to their August DVD line-up.

It’s senior year for our beloved Upper East Siders, and the drama is at an all-time high. Applying for college is only one small part of the story, as new romances (and some not-so-new romances) bloom and fade, scandals erupt at every turn and alliances shift even faster than Gossip Girl can send an update. Families and reputations are destroyed and made; so are fortunes. And even the strongest friendships are tested. In this sizzling season two, you never know what’s next for Serena, Blair, Dan, Nate, Jenny, Chuck and Vanessa. Good thing Gossip Girl is always there to provide us with the latest, juiciest info!

The 6-disc DVD set will feature an anamorphic widescreen presentation of the TV show with Dolby Digital 5.1 audio. As extras you will find a Gag Reeland Unaired Scenes on the release, as well as the Featurette ”Faces Behind the Design” showing you the forces behind the show’s art and fashion. Also included is the Interactive Map ”5th Ave. Meets Gossip Girl” where you can click icons and tour the “Gossip Girl” crowd’s favorite haunts. The Chasing Dorota Webisodes are also included as well as a Downloadable Audiobook of the bestselling novel “Gossip Girl: You Know You Love Me” by Cecily von Ziegesar, read by Christina Ricci.

“Gossip Girl: The Complete Second Season” arrives in stores on August 18 for $59.98, just in time for the TV premiere of the show’s third season.