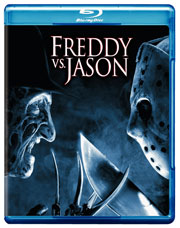 New Line Home Entertainment has added the cool slasher ckasher Freddy vs. Jason for release on Blu-Ray disc, scheduling the film for release in September.

Freddy Krueger is in hell – literally! And like an inmate with a life sentence, Freddy’s been plotting a fantastic revenge…all he needs is a little help. In comes Jason Vorhees, the equally iconic madman and perfect means for Freddy to once again instill fear on Elm Street. As the bodies begin to pile up, it becomes clear that Jason isn’t willing to step aside.

Now, with a terrified town in the middle, the two titans of terror enter into a horrifying and gruesome showdown. Winner kills all.

The release will feature a brand new 1080p high definition widescreen transfer of the film and serve it up with a Dolby Digital 6.1 TrueHD audio track, as well as a Dolby Digital 5.1 EX track.

Filled with bonus materials, you will find a Commentary Track by Freddy, Jason, and Director Ronny Yu on the release, as well as a series of Featurettes covering the Film’s Development, Art Direction, Makeup Effects, Stuntwork and More. Also included is a Visual Effects Exploration featurette with the Creative Team, as well as a number of Deleted & Alternate Scenes, including the Original Opening and Ending. Storyboards and Production Art Galleries as well as Publicity Vignettes and a selection of Trailers will also be included. The disc will be rounded out by the Ill Nino Music Video ”How Can I Live”.