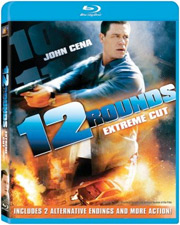 When New Orleans Police Detective Danny Fisher (John Cena) stops a brilliant thief from getting away with a multimillion-dollar heist, the thief’s girlfriend is accidentally killed. After escaping from prison, the criminal mastermind enacts his revenge, taunting Danny with 12 rounds of near-impossible puzzles and tasks that he must somehow complete to save the life of the woman he loves.

The DVD version will feature an anamorphic widescreen transfer with Dolby Digital 5.1 audio, while the Blu-Ray version will feature a 1080p high definition transfer, complemented with a DTS 5.1 HD Master Audio track. No exact bonus materials have been announced at this point but as you can see form the packaging, there will be 2 Alternate Endings on the release, as well as Additional Footage.