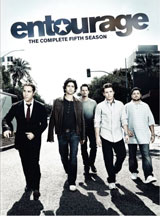 HBO Home Entertainment has just added a DVD version of Entourage: The Complete Fifth Season to their June line-up.

With its light-hearted take on showbiz, the series follows the rise of Vince Chase (Adrian Grenier), one of Hollywood’s hot young stars, and the three buddies he’s brought along from their hometown of Queens, N.Y. to share the fun – manager Eric (Kevin Connolly), half-brother/actor Drama (Kevin Dillon), and party pal Turtle (Jerry Ferrara).

Arriving as a 3-disc DVD set the release will contain all 12 episodes in anamorphic widescreen with dolby Digital audio. As extras you will find three hilarious Audio Commentaries on the release by writer/producers Doug Ellin and Ally Musika, and actors Adrian Grenier, Kevin Connolly, Jerry Ferrara.

Also included is the Featurette ”The Celebrity Factor” offering up a revealing, behind-the-scenes interviews with cast and crew members.

“Entourage: The Complete Fifth Season” is scheduled for release on June  30 for $39.98.