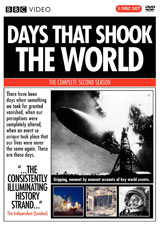 Warner Home Video has added a DVD version of the acclaimed BBC production Days That Shook the World: Season Two to their releases line-up.

The 2-disc DVD set will feature all ten season two episodes from the TV show, including “Disaster In The Sky, ” “The Christmas Truce, ” “Attack on Pearl Harbor,” “Grand Heist,” “Conspiracy to Kill,” “Reach For The Stars,” “Dinosaurs and Duplicity,” “Terror – Made In America,” “Cold War Spies” and “Affairs Of The Crown.”

The episodes will be presented in anamorphic widescreen and feature Dolby Digital Stereo audio tracks. No bonus materials will be included.

“Days That Shook the World: Season Two” will be in stores come August 4 and can be yours to own for $29.98.