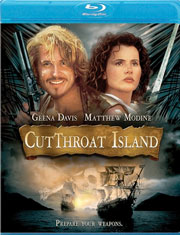 As we announced earlier this week, Lionsgate Home Entertainment has added Renny Harin’s 1995 fun-loaded pirate actioner Cutthroat Island to their Blu-Ray release schedule with an August date attached to it. We just received more detailed information about the release that we wanted to share with you.

Geena Davis and Matthew Modine deliver a tidal wave of nonstop action and adventure in this swashbuckling saga of ruthless pirates, buried treasure and bloodthirsty betrayal, that is also filled to the brim with funny moments. fter the death of her father, Morgan Adams (Geena Davis) discovers part of a treasure map tattooed on his head.  With the help of William Shaw (Matthew Modine), a convict she buys at an auction, Morgan hits the high seas to recover the remaining sections.  However, she is not alone: her murderous uncle Dawg (Frank Langella), who holds the puzzle’s final piece, also seeks the gold.  With a mutinous crew and the soldiers of the British crown in hot pursuit, Morgan and William set sail for Cutthroat Island, where the treasure – and danger – awaits.

The film will arrive in a 1080p high definition transfer, complemented by a DTS 7.1 HD Master Audio track. Also included on the release is a Commentary TRack as well as an Archival Featurette featuring interviews with cast and crew members. The movie’s Theatrical Trailer will round out the release.