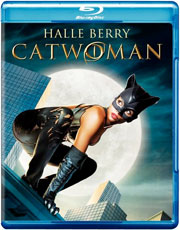 Warner Home Video has added a Blu-Ray Disc version of the 2004 comic book adaptation Catwoman to their fall line-up.

Patience Philips is dead – and more alive than ever. Murdered after she learns the secret behind a cosmetic firm’s anti-aging cream, she’s revived and empowered by mystical felines. Now she’s on the slinky prowl for adventure and revenge. Academy Award winner* Halle Berry plays the sleek, whip-cracking feline fatale, Benjamin Bratt is a cop torn between romance and duty and Sharon Stone is an ice-blooded supermodel with something to hide in a kicky and stylish Catwoman. With catlike grace, a knack for landing on her feet, a passion for sushi and a loathing for dogs, Berry unsheathes action with attitude.

The release will feature a 1080p high definition transfer of the movie in its original 2.35:1 widescreen aspect ratio and complement it with a high definition audio track. Extras on the release include an Alternate Ending and Additional Scenes, as well as two Featurettes, ”Behind the Scenes” and ”The Many Faces of Catwoman”. The release will be rounded out by the movie’s Theatrical Trailer.

“Catwoman” will sink her claws into your home theater on September 8 for $28.99.