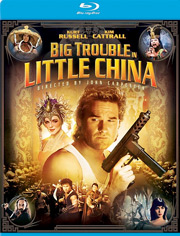 In an announcement that just completely made my day, 20th Century Fox Home Entertainment has announced a Blu-Ray version of John Carpenter’s Big Trouble In China for release in August.

Directed by thrill master John Carpenter, this edge of your seat adventure stars Kurt Russell as Jack Burton, a tough talking, wisecracking truck driver whose hum drum life on the road takes a sudden supernatural tailspin when his best friend’s fiancée is kidnapped. Speeding to the rescue, Jack finds himself deep beneath San Francisco’s Chinatown, in a murky, creature filled world ruled by Lo Pan, a 2000 year old magician who mercilessly presides over an empire of spirits. Dodging demons and facing baffling terrors, Jack battles his way through Lo Pan’s dark domain in a full throttle, action riddled ride to rescue the girl. Co-starring Kim Cattrall, this effects-filled sci-fi spectacle speeds to an incredible, twist-taking finish.

The release will offer up a 1080p high definition transfer of the movie, complete with a DTS 5.1 HD Master audio track. No bonus materials have been announced as of yet, but we will keep you posted on any new info that comes in. Considering how elaborate previous DVD versions were, we believe it is safe to say that this Blu-Ray Disc will be filled to the brim with goodies when it hits store shelves on August 4 for $29.99.