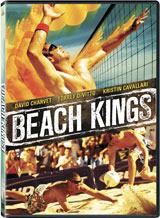 MGM Home Entertainment has added a DVD version of Beach Kings to their roster, lining up the release for the heat of July.

Get set for an above-the-net kill shot of adrenaline as Beach Kings takes you inside in the hard-hitting, hard-bodied world of professional beach volleyball! David Charvet stars as Cameron Day, a former college basketball star with one last shot at greatness—the professional beach volleyball tour. Athletically gifted and hungry to learn, Cameron has his eyes on the championship—and on a sexy, elusive beauty (Torrey DeVitto). But first, Cameron must face the demons of his troubled past. Spiked with action, humor, and drama, and featuring some of volleyball’s greatest stars, Beach Kings is your ticket to center court—the hottest seat on the beach!

The release will feature an anamorphic widescreen transfer of the film with Dolby Digital 5.1 audio. No extras have been announced for the title.