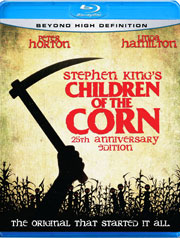 Anchor Bay Entertainment has just unveiled plans to release the Stephen King-based Children Of The Corn in Blu-Ray Disc in August.

Something unspeakable is alive in the cornfields of rural Gatlin, Nebraska, where a boy preacher has led the village’s children in a slaughter of all the adults. But when a traveling couple (Linda Hamilton and Peter Horton) stumble across this deserted town, they became prisoners of child madman Isaac, his henchman Malachai and their kid cult of unholy believers. Judgment Day has arrived: Will the blood of the “outlanders” flow in sacrifice to their god or is the final fury of “He Who Walks Behind the Rows” coming for them all?

The release will feature a 1080p high definition transfer and come with a Dolby Digital 5.1 TrueHD audio track. The disc will also contain a bushel of bonus materials, such as an Audio Commentary by director Fritz Kiersch, producer Terrence Kirby and actors John Franklin and Courtney Gains. Also included is the Featurette ”Harvesting Horror”, about the making of the movie, presented in standard definition. However, the release will also contain a number of brand new bonus materials, all presented in high definition, such as It Was The Eighties!, in which Linda Hamilton talks about working on the film, offering up great behind-the-scenes stories about the cast and crew. Another new entry is Stephen King on a Shoestring, an all-new Interview with producer Donald Borchers. among the newcomers is also Welcome to Gatlin, exploring the Sights and Sounds of Children of the Corn in an Interview with production designer Craig Stearns and composer Jonathan Elias.

The release will be rounded out by Fast Film Facts and the movie’s Original Theatrical Trailer.