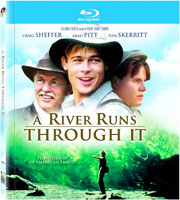 Sony Pictures Home Entertainment has added A River Runs Through It to their Blu-Ray Disc lineup, scheduling the film for release in July.

Narrated by Robert Redford, “A River Runs Through It” revolves around two brothers, their minister father (Tom Skerritt) and the river that comes to shape their lives. Brothers Norman (Craig Sheffer) and Paul (Brad Pitt) are very much alike, but also strikingly different. Norman emulates his scholarly and morally upright father while Paul is daring and much more of a rebel.
As the sons grow in different directions, the tough stoicism they’ve inherited from Norman makes it impossible for them to express their feelings for each other.  However, through the sport of fly fishing, they find a discipline that irrevocably links them to nature; and in its beauty, they discover a harmony that ultimately brings them together.

Featuring a 1080p high definition transfer with high definition audio, the release will also include a number of never-before-released Deleted Scenes . Also included are brand new Featurettes such as ”Casting a Line: The Beginner’s Guide to Fly Fishing,” hosted by master fly fisherman Brandon Boedecker, which takes you step by step through the process of fly fishing. Also new is”The Blackfoot Challenge: Rescuing a River”, the compelling true story of the destruction of Montana’s Blackfoot River, and how a committed group of volunteers (assisted by Robert Redford and the film crew) helped generate enough money to restore this natural treasure. New also is ”Deep Currents: Making a River Runs Through It”, an in-depth exploration of the movie’s creation, in which Redford talks about his long and challenging journey to turn Norman Maclean’s evocative book into a transcendent piece of cinema. In addition you will find a selection of On The Blackfoot River Hi-Def Looping Screen Savers on the disc. In addition, the Blu-Ray release will be packaged in a 32-page book with photos, talent files and three pages of the Oscar-nominated screenplay.