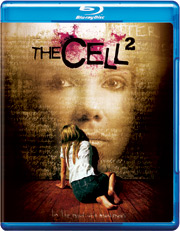 Warner Home Video has added the horror thriller The Cell 2 for release in June, bringing the disturbing movie to DVD and Blu-Ray Disc.

Imagine a serial killer who flatlines his victims and then brings them back to life over and over again, until they beg to die. Beautiful psychic investigator Maya Casteneda (Tessie Santiago) was his last victim and swore vengeance on her tormentor before she escaped. Now The Cusp is back, and the FBI taps Maya to help capture the elusive monster. Maya soon discovers the only way she can locate The Cusp is to enter his head. The danger: if Maya dies in the killers brain, she dies in real life! Like the trailblazing original, The Cell 2 is a mind-blowing mix of fantasy and reality that enters a place of fear and power like no other: the thoughts of a psychopath.

The DVD version of the thriller will arrive in an anamorphic widescreen transfer with Dolby Digital 5.1 audio. As a bonus the release will also contain a Behind-the-scenes Featurette.

The Blu-Ray version will feature a 1080p high definition transfer of the film that is complemented by a Dolby Digital 5.1 TrueHD audio track. It will also feature the Behind-the-scenes Featurette found on the DVD version, sadly only in standard resolution also. In addition, this version will offer BD Live connectivity for additional supplements over the Internet.