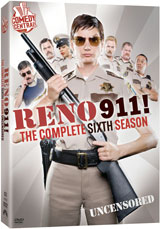 Arriving as a 2-disc DVD set, the release will present the show in its original fullframe aspect ratio with a Dolby Stereo audio track. As in the previous season releases of the show, the release will offer up various Deleted Scenes and Outtakes, as well as Cast & Crew Commentary on select episodes from the season.