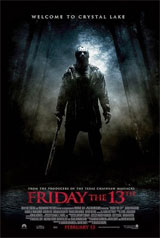 As Paramount announced another slate of films from the franchise last week, Warner Home Video and New Line Home Entertainment have no unveiled plans to bring the remake of Friday The 13th to DVD and Blu-Ray Disc in June.

Breaking with the chronology of the series, hard core fans might be somewhat thrown off in this installment as Jason Vorhees is still back at Crystal Lake, where a group of young adults discover a boarded up Camp Crystal Lake, and all too soon they encounter Jason Voorhees (Derek Mears) and his deadly intentions.

The film will be released in Two versions on DVD, the first one offering the movie’s Theatrical Version while the other one dishes out a Killer Cut that adds an extra 9-minutes of footage to the film. The release will comes with a series of Production Featurettes and most likely a Commentary Track

The Blu-Ray version that has been announced is not yet revealing any details but expect a 1080 p high def transfer with DTS 5.1 HD Master Audio, and the same bonus materials as the DVD versions. We also expect that this version will offer up either the unrated Killer Cut, or both, the theatrical and unrated versions on the same disc.