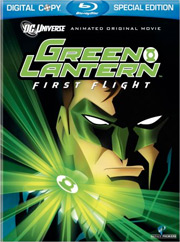 Warner Home Video has added the animated The Green Lantern: First Flight for release on DVD and Blu-Ray Disc this July.

When Hal Jordan first becomes a Green Lantern, he is put under the supervision of senior Lantern, Sinestro, only to discover that his so-called mentor is part of a secret conspiracy that threatens the entire Green Lantern Corps.

On DVD you can choose between a single-disc version and a 2-disc Special Edition, both featuring a widescreen version of the film with Dolby Digital 5.1 audio. The Special Edition release will contain a number of bonus materials, such as a Commentary Track for the animated movie, as well as a Sneak Peek of the next upcoming DC Universe title and a series of Featurettes of Superman Doomsday, Justice League New Frontier, Batman Gotham Knight & Wonder Woman. The release will be rounded out by Trailers.

The Blu-Ray version will arrive on a BD-25 disc, featuring a 1080p transfer of the film as well as all the extras found on the Special Edition DVD.