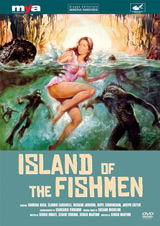 Mya Communication, a small independent label, has announced the release of the 1979 Italian schlocker Island Of The Fishmen and scheduled the DVD for June.

It’s 1891: Lieutenant Claude de Ross (Claudio Cassinelli), a military doctor, and a few newly escaped convicts are shipwrecked on a mysterious tropical island. They soon come across a strange couple: the sadistic Edmund Rackham (Richard Johnson) and the beautiful Amanda Marvin (Barbara Bach). The doctor finds out that Amanda’s father, professor Ernest Marvin (Joseph Cotten), is a mad scientist who is experimenting on horrible human-fish mutations. While Professor Marvin is convinced that he’s doing his research for humanitarian motives, Rackham has other plans, since he has discovered an incredible secret lying beneath the island.

The DVD will feature a widescreen presentation of the movie but no other details have been announced.