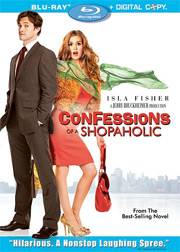 Buena Vista Home Entertainment has added a DVD and Blu-Ray Disc version of the comedy Confessions Of A Shopaholic to their June schedule.

Get ready to fall in love with the adorable Becky Bloomwood (Isla Fisher) in the hilarious romantic comedy Confessions Of A Shopaholic. Living in glamorous New York, Becky desperately wants a job writing for a high-fashion magazine. She gets her stilettos in the door when she gets a job writing a personal finance column at a sister publication. Much to her surprise, her column not only becomes a huge hit, but she falls head over high heels for her overworked yet handsome boss (Hugh Dancy). But Becky has a secret that leads to some hilarious high jinks that could unravel it all. From the best-selling novel, and featuring the perfect comedic cast, it’s the feel-good must-have romantic comedy you’ll fall in love with over and over again.

On DVD you will have the choice between two version of the release, one with and another without a Digital Copy. The release will contain Bloopers and Deleted Scenes as well as a Music Video.

The Blu-Ray version, will also be available in two versions, one with and the other without a Digital Copy, but both offering up a 1080p high definition transfer with DTS 5.1 HD Master Audio. As extras you will also find the Bloopers and Deleted Scenes as well as the Shontelle Music Video from the DVD on the disc, but in addition to these, there will be two additional Music Videos and the Multi-part Documentary ”Behind the Fashion”, a collection of insider peeks at the making of the movie, highlighting aspects, such as the Wardrobe by Patricia Field, in which the renowned fashion designer takes viewers into her studio and shares some of the secrets of her outrageous creative process. Another part covers Temple of Shopping in which the inspiration for Rebecca Bloomwood’s fashion wonderland is finally revealed, or The Green Scarf for fans to learn more about the all-important accessory that drives Rebecca to take desperate measures. Also part of the Documentary is New York Fashion Central, a style-centric tour of the home of more shopaholics per square foot than anywhere else on the planet, and Sample Sale Madness, a closer look at the filming of the film’s hilariously chaotic shopping spree. The final part ofthe documentary will tkae a look at Window Shopping in which the Shopaholic team brings store windows to life along shopping mecca Madison Avenue.