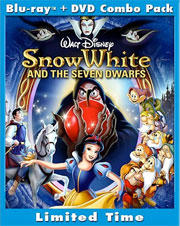 As announced earlier, Snow White and the Seven Dwarves is coming to Blu-ray and being re-released to DVD later this year. But for Blu-ray fans, a few different package options will be available.

Although only one version of the Blu-ray itself is going to be available, several packages will be coming. The standard disc – like previous Disney releases – will come packaged with a DVD in the Blu-ray case, but for folks comfortable with their DVD shelves, the two disc set will also be available in a DVD case for those who aren’t ready for the leap to tiny blue boxes.

Three collector’s editions will also be available. The first comes with a book on the film for $60, the second comes with a plush toy for $80 and the final set comes with a price tag of $250, so there had better be some amazing swag in that box. All versions are coming later this year.