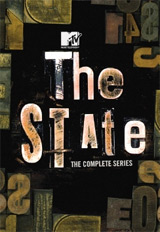 The underground sketch comedy series The State has been a perpetual enigma for DVD fans, but years after rumors of the series on disc began, the show will make it’s DVD debut in July.

“The State” was simply one of the sharpest, funniest, and most under-rated shows of the 1990’s. Originally created as MTV’s first foray into the sketch comedy genre, “The State” was a comedic gem that rocked Generation X with slapstick, smarts and witty sarcasm. The dynamic cast features 11 multi-talented actors that have continued to collaborate on such projects as “Reno 911!,” “Stella,” “Viva Variety” and “Wet Hot Amercian Summer.” MTV’s timeless sketch comedy show, “The State,” is finally here.

The DVD set contains all the episodes of the series including selected Commentaries, Unaired Sketches, Outtakes, a number of Featurettes on Special Appearances, Interviews, Promos and DVD-ROM content (that’s what us old timers had before BD-Live).