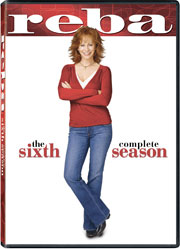 Reba: The Complete Sixth Season has been slated for release by 20th Century Fox Home Entertainment for June
Get ready to join country superstar Reba McEntire and bid farewell to America’s first family of down-home dysfunction in the hilarious and heart-felt final season of Reba.  McEntire stars as Reba Hart, a feisty single mother whose family is feeling some major growing pains.  Van and Cheyenne are expecting a baby, Kyra wants to drop out of school, and Brock and Barbara Jean’s marriage is on the rocks—again.  And, as usual, Reba is caught in the middle, doing all she can to keep the peace—and her sanity. All it takes is a little tough love…and a whole lot of heart.

“Reba: The Complete Sixth Season” will be presented in its original 1.78:1 aspect ratio on this DVD release, complete with Dolby Surround audio. Sadly the release will not contain any bonus materials.

Mark you calendars for June 23 when Reba appears for her sixth season for only $29.98.