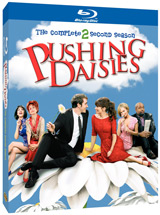 Warner Home Video has just unveiled details about the upcoming release of Pushing Daisies: The Complete Second Season, scheduled for release in July on both DVD and Blu-Ray Disc.

During Season Two, the group’s murder-solving escapades take them to the most unlikely places to solve some of the weirdest cases, including a honey-based cosmetics company where a spokesmodel is found stung to death; a circus where people keep turning up dead; a convent where a truffle-savvy nun is murdered; a Dim Sum restaurant that serves up illegal gambling; a magic castle whose main attraction dies during his act and even a lighthouse to investigate the death of its keeper.

“Pushing Daisies” follows the whimsical story of Ned, a handsome, wistful pie maker who can resuscitate the dead with his touch.

However, there is a caveat to his talent. If something he’s revived remains living for more than one minute, then something nearby of similar life value will die.  If he touches the resurrected a second time, that life will die permanently – a stipulation which proves to be a great strain when Ned resurrects his beautiful childhood sweetheart, Charlotte “Chuck” Charles.  The results are bittersweet as they attempt to carry on a romantic relationship, and Ned is left traumatized by both his gift and his unfulfilled longing for Chuck.

Ned owns a restaurant called the Pie Hole, which he runs with kooky, lovelorn waitress Olive Snook. To earn extra money, Ned strikes a deal with the gruff but lovable private investigator Emerson Cod in which they temporarily bring murder victims back to life in order to inquire about the circumstances of their death. They use the information to solve their cases and collect reward money.

This second season DVD set will also contain a series of Featurettes, such as ”The Master Pie Maker”, allowing you to hop into creator Bryan Fuller’s mind to discover the inner secrets of Pushing Daisies! ” From Oven to Table” is another featurette that follows the production challenges of taking one of Bryan Fuller’s script ideas, involving a lighthouse and an egg, and crafting it into reality.

”Secret Sweet Ingredients” gives you the chance to learn how composer Jim Dooley’s music shapes a scene in ways most viewers aren’t even aware of, while ”Add a Little Magic” gives you a look at the visual effects team bringing a 2-ton rhino to life and learn about the challenges of executing a scene to rival Jumanji!