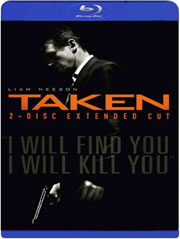 We just received info from 20th Century Fox Home Entertainment about their upcoming release of the thriller Taken, which is slated for release in May on DVD and Blu-Ray Disc.

Liam Neeson makes his mark in this action-packed international thriller that will have you on the edge of your seat from start to finish. When his estranged teenage daughter (Maggie Grace) is kidnapped in Paris, a former spy (Neeson) sets out to find her at any cost. Relying on his special skills, he tracks down the ruthless gang that abducted her and launches a one-man war to bring them to justice and rescue his daughter.

Fox will release two DVD versions of the film, one featuring the movie only on a single disc, the other a 2-disc Extended Edition featuring a widescreen version of the film with Dolby Digital 5.1 audio and a number of extras.

The Blu-Ray version will also be released as a 2-disc Extended Edition, offering up the movie in glorious 1080p high definition, complemented by a DTS 5.1 HD Master Audio track to boot.

Sadly the studio is still tight-lipped regarding the exact contents of the release despite the close release date, but we will keep you posted, of course, as soon as more info becomes available. For now, mark you calendars for May 12 when “Taken” arrives on single-disc DVD for $29.99, as the 2-disc DVD version for $34.99 and on Blu-Ray for $39.99.