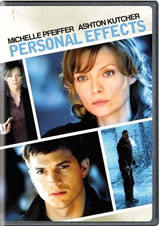 Universal Home Entertainment has announced and unveiled the details for the upcoming drama Personal Effects, arriving on DVD and Blu-Ray Disc in May.

Walter (Ashton Kutcher) is a rising star in the NCAA wrestling world until his life is ripped apart by the brutal murder of his sister. Returning home to console his mother Gloria (Kathy Bates) he seeks vengeance on the man who is accused of the crime. A chance meeting with a beautiful mature woman (Michelle Pfeiffer) gives him solace to the situation. Personal Effects is a heartbreaking and ultimately uplifting romance that is a testament to the power of love.

The DVD version of the film will offer a widescreen transfer of the film with Dolby Digital 5.1 audio and also contain a Behind The Scenes Featurette.

The Blu-Ray version will serve up a 1080p high definition transfer with a DTS 5.1 HD Master audio track and will also contain the Behind The Scenes Featurette as a bonus.