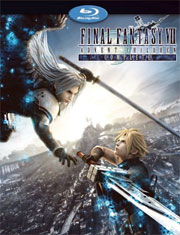 Two years have passed and the ruins of Midgar stand as a testament to the sacrifices made in order to bring peace. However, the world will soon face a new menace. A mysterious illness is spreading fast. Old enemies are astir. And Cloud, who walked away from the life of a hero to live in solitude, must step forward yet again…

The disc will include the animated short On the Way to a Smile, the featurettes Reminiscence of Final Fantasy VII, Compilation and Legacy of Final Fantasy VII along with a trailer and a sneak peek at Final Fantasy XIII. Rumors are swirling on whether this will be a playable demo or just a video presentation.