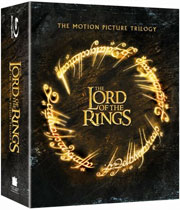 The Lord of the Rings is making its way to Blu-Ray Disc later this year from New Line Home Entertainment. Available for pre-order now at Amazon.com, the obvious question is which version will be arriving. Well bad news and good; the box set will only contain the original theatrical versions of the films with minimal features. But Peter Jackson has announced his intention of releasing the extended versions closer to the release of The Hobbit.

The theatrical versions of Frodo and his companions on their quest to put an end to Sauron’s evil schemes to rule the world will arrive later this year, though no exact release date has been set.