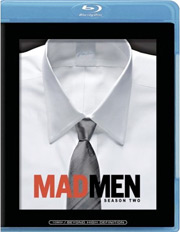 Just in time for the start of the show’s third season, Lionsgate Home Entertainment has just announced Mad Men: Season 2 for release on DVD and Blu-Ray Disc in July.

“Mad Men” is the ground-breaking series about the glamorous and ego-driven “Golden Age” of advertising, where everyone is selling something and nothing is ever what it seems.  In its second season, “Mad Men” continues to blur the lines between truth and lies, perception and reality. The world of Mad Men is moving in a new direction — can Sterling Cooper keep up?  Meanwhile, the private life of Don Draper becomes complicated in a new way.  What is the cost of his secret identity?

The release will contain all 13 episodes of the second season as well as a number of bonus materials, such as Commentary Tracks and Featurettes. Among the featurettes you will find a look at the rise of women in the work place, the influence of 1960’s fashion, and the historical events that defined the era.