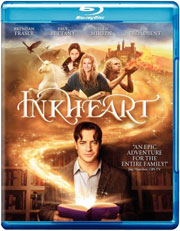 New Line Home Entertainment has just unveiled details about the upcoming release of the fantasy adventure Inkheart, scheduled for release on DVD and Blu-Ray Disc in June.

Mortimer “Mo” Folchart (Brendan Fraser) and his 12-year-old daughter, Meggie (Eliza Hope Bennett), share a passion for books. What they also share is an extraordinary gift for bringing characters from books to life when they read aloud. But there is a danger: when a character is brought to life from a book, a real person disappears into its pages.
On one of their trips to a secondhand book shop, Mo hears voices he hasn’t heard for years, and when he locates the book they’re coming from, it sends a shiver up his spine. It’s Inkheart, a book filled with illustrations of medieval castles and strange creatures–a book he’s been searching for since Meggie was three years old, when her mother, Resa (Sienna Guillory), vanished into its mystical world.
But Mo’s plan to use the book to find and rescue Resa is thwarted when Capricorn (Andy Serkis), the evil villain of Inkheart, kidnaps Meggie and, discovering she has inherited her father’s gift, demands that she bring his most powerful ally to life–the Shadow. Determined to rescue his daughter and send the fictional characters back where they belong, Mo assembles a small group of friends and family–some from the real world, some from the pages of books–and embarks on a daring and perilous journey to set things right.

The DVD version, offering up an anamorphic widescreen transfer with Dolby Digital 5.1 audio, will also contain the Featurette ”Eliza Reads to Us” in which actress Eliza Bennett (“Meggie Folchart”) shares one of her favorite passages from the book that did not end up in the movie, accompanied by Cornelia illustrations of the story.

The Blu-Ray version of the film offers up a 1080p high definition transfer with high definition audio and will contain significantly more extras than the DVD version. Apart from the Featurette ”Eliza Reads To Us” this version will also include the Featurette ” From Imagination to the Page: How Writers Write”, that discusses what goes on in the mind of a writer?  How does an idea make it to page?  Novelist Cornelia Funke and others tell how you know you have a good idea, the creation of characters, choosing the location and the inspiration behind “Inkheart.”.

The Blu-Ray version will also include Deleted Scenes and a Featurette called ”A Story from the Cast and Crew” in which, playing the game “tell me a story,” Novelist Cornelia Funke starts the cast & crew off on this wild adventure by giving the first line, “I discovered the hole under my bed on my thirteenth birthday….”

A BD-Live extension will also be included, featuring a Commentary by Director Iain Softley. The release is rounded out by a standard definition Digital Copy of the movie.