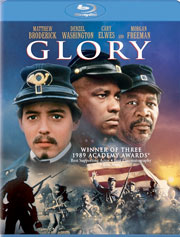 Glory will arrive on Blu-Ray Disc from Sony Pictures Home Entertainment in the coming months as a nice package.

The heart-stopping story of the first black regiment to fight for the North in the Civil War, Glory stars Matthew Broderick, Denzel Washington, Cary Elwes and Morgan Freeman. Broderick and Elwes are the idealistic young Bostonians who lead the regiment; Freeman is the inspirational sergeant who unites the troops; and Denzel Washington, in an Oscar® – winning performance (1989, Best Supporting Actor), is the runaway slave who embodies the indomitable spirit of the 54th Regiment of Massachusetts.

One of the great Civil War films, Glory comes in 1080 AVC with Dolby TrueHD sound. Extras includ an interactive map and the existing featurettes The Voices of Glory, The True Story Continues and The Making of Glory and deleted scenes. An audio commentary is included, but no word on whether this will be the video commentary which was fairly revolutionary on the DVD.