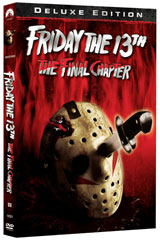 Paramount Home Entertainment has added more of the Friday The 13th movies to their release line-up, scheduling another batch on DVD and Blu-Ray Disc for June.

The line-up includes a new DVD version of Friday the 13th – The Final Chapter as a Deluxe Edition. The body count continues in this vivid thriller, the fourth – but not final – story in the widely successful Friday the 13th series. Jason, Crystal Lake’s least popular citizen, returns to wreak further havoc in Friday the 13th – The Final Chapter. After his revival in a hospital morgue, the hockey-masked murderer fixes his vengeful attention on the Jarvis family and a group of hitherto carefree teenagers. Young Tommy Jarvis is an aficionado of horror films with a special talent for masks and make-up. Has the diabolical Jason finally met his match?

The release will feature an anamorphic transfer of the movie with Dolby Digital 5.1 audio and a host of extras, such as a Commentary Track by director Joe Zito, screenwriter Barney Cohen and editor Joel Goodman. On another track you will find a Fan Commentary with Adam Green and Joe Lynch. The disc will also contain the Featurette ”Lost Tales from Camp Blood – Part 4” as well as Slashed Scenes and The Severed Ending.

The there are the Featurettes ”Jason’s Unlucky Day: 25 Years After Friday the 13th – The Final Chapter,” “Crystal Lake Massacre Revisited – Part 1” and a look at Adam Green’s Dead Dance Moves and the movie’s Original Theatrical Trailer.

Next in line is a DVD version of Friday the 13th Part V – A New Beginning, also arriving in a new Deluxe Edition. Jason is back, hockey mask and all. And he’s up to his old maniacal tricks in Friday The 13th, Part V: A New Beginning. This time he seems to have set his sights on the young patients at a secluded halfway house. And more than a few of his teen targets end up in half, in quarters…you name it, Jason does it. This is the fifth scary installment in the Friday The 13th saga. If you liked the first four, and think you’re up to getting back on Jason’s bloody trail, you’ll love Friday The 13th, Part V: A New Beginning.

Presented in widescreen with Dolby Digital 5.1 audio, the disc will come with a Commentary Track by director/co-screenwriter Danny Steinmann and cast and crew members. The Featurettes ”Lost Tales from Camp Blood – Part 5,” “Crystal Lake Massacre Revisited – Part 2” and ”New Beginnings: The Making of Friday the 13th – Part 5” will also be included as well as the movie’s Original Theatrical Trailer.

Friday the 13th, Part VI: Jason Lives also begets a Deluxe Edition DVD in widescreen with Dolby Digital 5.1 audio. As a child, Tommy Jarvis did what many others died trying to do, he killed Jason Vorhees, the mass murderer who terrorized the residents of Crystal lake. But now, years later, Tommy is tormented by the fear that maybe Jason isn’t really dead. So, Tommy and a friend go to the cemetery to dig up Jason’s grave. Unfortunately for Tommy, (and very unfortunately for his friend), instead of finding a rotting corpse, they discover a well rested Jason who comes back from the dead for another bloody rampage in Friday The 13th, Part VI: Jason Lives.

This DVD will feature a Commentary Track with director Tom McLoughlin and cast and crew members. Of course, a series of Featurettes are included here as well, such as ”Lost Tales From Camp Blood – Part 6,” “Crystal Lake Massacre Revisited – Part 3,” “Jason Lives: The Making of Friday the 13th – Part 6,” “Meeting Mr. Voorhees” and Slashed Scenes.
The movie’s Original Theatrical Teaser Trailer rounds out the disc.

Blu-Ray Disc the studio will unveil Friday The 13th: Part 2 in which you should get ready for twice the terror! Five years after the massacre at Camp Crystal Lake, the nerve-wracking legend of Jason Vorhees and his diabolical mother lives on. Despite ominous warnings from the locals to stay away from “Camp Blood” a group of counselors at a nearby summer camp decide to explore there area where seven people were brutally slaughtered. All too soon, they encounter horrors of their own and the killing begins again. You’ll be at the edge of your seat for this gruesome thriller about 24 hours of bone-chilling fear!

Offering up a 1080p high definition transfer and Dolby Digital 5.1 TrueHD audio, the release will also contain a series of all-high def bonus materials, such as the Featurettes ”Inside ‘Crystal Lake Memories,” “Friday’s Legacy: Horror Conventions,” “Lost Tales from Camp Blood – Part 2” and ”Jason Forever”.Also the movie’s Original Theatrical Trailer will be included in high definition.

The last in the line-up is a Blu-Ray version of Friday The 13th: Part 3 – 3D.
It’s spine-tingling horror in a whole new dimension as Friday the 13th Part 3 – 3D arrives in high definition! A carefree summer becomes a deadly nightmare for another group of naive counselors who chosoe to ignore Camp Crystal Lake’s gruesome legacy. They find themselves in a bloody game of cat-and-mouse with the maniacal Jason, who stalks their every move… and ruthlessly kills them off one by one.

This version also boasts all-high def bonus materials, such as the Featurettes ”Fresh Cuts: 3D Terror,” “Legacy of the Mask,” “Slasher Films: Going for the Jugular” and ”Lost Tales From Camp Blood, Part 3”. Of course ,the movie’s Theatrical Trailer is also included.