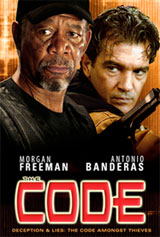 First Look Studios has announced a DVD and Blu-Ray Disc version of the thriller The Code, starring Antonion Banderas and Morgan Freeman, coming to stores in June.

From acclaimed director Mimi Leder, with an all-star action cast led by Morgan Freeman, Antonio Banderas and Rhada Mitchell, “The Code” is full of deceit, thievery and twists at every turn. While pulling a down-and-dirty jewelry heist on a subway train, Jack (Banderas) encounters Ripley (Freeman), a legendary thief who was casing the same job. In spite of Jack’s initial reluctance, Ripley manages to rope him into an impossible job: the theft of two priceless Faberge Imperial Eggs from the heavily guarded vault of a New York diamond wholesaler. The stakes rise for Jack and Ripley when Ripley’s goddaughter (Mitchell) is kidnapped by the KGB. Staying one step ahead of the NYPD, the FBI, the diamond merchants and the vicious Russian KGB crime boss determined to have the priceless eggs for himself, Jack and Ripley must find a way to pull off the heist and make it out alive.

The DVD version will feature an anamorphic widescreen transfer of the film with Dolby Digital 5.1 audio. The release will sadly not contain any extras.

The Blu-Ray version will feature a 1080p high definition transfer, also supplemented by a Dolby Digital 5.1 audio track, and no extras.