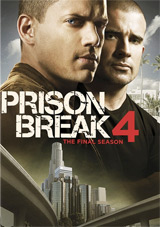 As we announced some time ago, 20th Century Fox Home Entertainment is preparing a DVD release of the TV series Prison Break: Season 4 for June. Finally we have received final specs and details about this anticipated release.

After engineering an escape from the hellish Panamanian prison Sona, brothers Michael Scofield and Lincoln Burrows are determined to seek justice against The Company, the shadowy group responsible for destroying their lives and killing the woman Michael loves, Dr. Sara Tancredi.  During their quest for vengeance, Michael’s world is turned upside down when he learns that Sara is still alive.  Realizing the only way they will truly be free, Michael and Lincoln avenge to find Sara and take down The Company.  With the help of a government handler, they assemble a group of allies and familiar faces including Mahone, Sucre and Bellick to aid in their seemingly impossible task. Unfortunately for the brothers, they must also enlist T-Bag, who unknowingly possesses a vital clue to help them pull off their most difficult challenge yet.  They’ll soon discover the only thing harder than breaking out is breaking in. The ending with shock you!!

In addition to these tracks, the release will also contain the Featurette “Fade to Black: The Final Episode” as well as Director’s World.