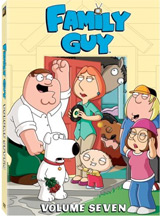 With all-new uncensored hilarity and hi-jinx, the national phenomenon continues as the Griffin clan embarks on even more outrageous adventures.  Highlights include zany antics such as Peter’s obsession with a 1963 hit song “Surfin’ Bird,” Stewie kidnapping the entire cast of “Star Trek: The Next Generation” and Brian getting injured during a take of Peter’s version of “Jackass.”

The DVD set will contain 13 episodes from the animated show’s sixth and seventh season, complete with an Uncensored Commentary Track on every episode. Also included are 29 Deleted Scenes, 3 Animatic Episodes and a number of Featurettes.