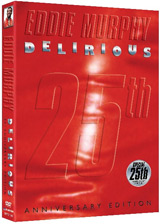 When Eddie Murphy hit the stage in the ‘80s, he had the swagger of Elvis, but with a red leather suit that was more Prince than Presley. Murphy would change the face of comedy, influencing a generation of hip comics to come including Chris Rock and Dave Chappelle. Now, to celebrate its 25th Anniversary, Anchor Bay Entertainment is bringing Eddie Murphy Delirious to DVD in June.

When the young comic took to the stage, absolutely NOTHING was sacred! Jokes about puberty, dating, Mr. T, disciplinarian mothers, and the personality traits of Michael Jackson were all fair game when Murphy (fresh from “SNL”) would riff and roar with a mastery of mimicry. Taped live and in concert at Constitution Hall in Washington, D.C. in August 1983, the stand-up special originally aired uncut on the then-still new concept of premium TV and became a massive seller on something called VHS tape.

The release will comes as a 2-disc DVD set in an all new “Red” edition that also includes never-before-seen footage of Murphy being interviewed and a new Featurette not available on any other edition. Also included is Deleted Footage from the original concert.