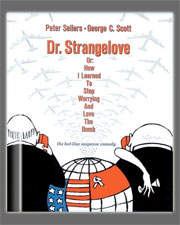 Stanley Kubrik’s wickedly dark comedy Dr. Strangelove Or How I Learned To Stop Worrying And Love The Bomb has been added to Sony Pictures Home Entertainment’s June line-up on Blu-Ray Disc.

The cult movie, featuring Peter Sellers in three roles in the midst of impending nuclear war has long been one of the fan favorites among Kubrik aficionados. In the film, a psychotic Air Force General unleashes an ingenious foolproof and irrevocable scheme sending bombers to attack Russia. Meanwhile the U.S. President works with the Soviet Premier in a desperate effort to save the world and prevent mankind’s complete annihilation.

This 45th Anniversary Edition Blu-Ray version will present the film in its original 1.66:1 aspect ratio in a 1080p high definition transfer, complemented by high definition audio. In addition, the release will contain a number of bonus materials, such as an Interview with Robert McNamara as well as a brand new Picture-in-picture Video Commentary Track called “Cold War” offering clips, interviews and Trivia facts.

A series of Featurettes are also included, such as ”Best Sellers: Peter Sellers Remembered,” “Inside: Dr. Strangelove,” “No Fighting in the War Room or: Dr. Strangelove and the Nuclear Threat” and ”The Art of Stanley Kubrick: From Short Films to Strangelove”.