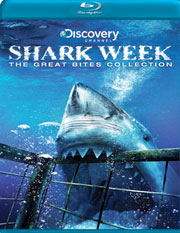 The Discovery Channel will be releasing another entry from one of their favorite franchises on DVD and Blu-Ray Disc in July, when Shark Week: The Greatest Bites Collection arrives in stores.

Where in the world can you find the strangest and most deadly sharks? Why do sharks sometimes prey on humans? When are you most likely to be attacked? And what can you do to avoid becoming shark food? If you’re hungry for answers, join the experts and some of Discovery Channel’s bravest hosts as they go swimming with the ocean’s most feared predator to answer all your biting questions.