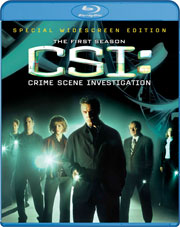 This is just a short reminder that Paramount Home Entertainment will be releasing the first season of the original CSI: Crime Scene Investigation on Blu-Ray in May.

Arriving in its original widescreen aspect ratio for the first time ever, the disc set will feature a 1080p high definition transfer and complement it by a gorgeous 7.1 channel high definition audio track!

But Paramount didn’t stop there. Included on the set are all 23 episodes from the show’s first season, including two infamous episodes – “Blood Drops, ” the quadruple murder that is arguably one of the best CSI episodes, and “Unfriendly Skies,” named by TV Guide as one of the top ten episodes of the year (2000). In addition, the release will dish out a series of bonus materials, such as Commentary Tracks on select episodes, Deleted Scenes and Outtakes, as well as Promos and Featurettes in high definition.