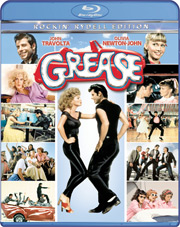 After having seen numerous releases on various platforms, Paramount Home Entertainment is putting the final touches to their Blu-Ray Disc release of Grease, which is scheduled for May.

John Travolta solidified his position as the most versatile and magnetic screen presence of the decade in this film version of the smash hit play Grease. Recording star Olivia Newton-John made her American film debut as Sandy, Travolta’s naive love interest. The impressive supporting cast reads like a “who’s who” in this quintessential musical about the fabulous “50s. Grease is not just a nostalgic look at a simpler decade–it’s an energetic and exciting musical homage to the age of rock ”n’ roll!

The release offers up the film in 1080p high definition and spices it up with a Dolby Digital 51. TrueHD audio track that should get your feet tapping, no doubt.

Filled with extras, look forward to an Introduction by director Randal Kleiser and a Commentary Track by Randal Kleiser and choreographer Patricia Birch. The deisc will also contain a large number of Deleted Scenes and Extended Scenes as well as the Retrospective Featurette ” The Time, The Place, The Motion”.

In addition, the disc will contain a large number of additional Featurettes, such as ”Grease on DVD Launch Party,” “Grease Memories from John & Olivia,” “The Moves Behind the Music,” “Thunder Roadsters,” “John Travolta and Allan Carr “Grease Day” Interview” and ”Olivia Newton-John and Robert Stigwood “Grease Day” Interview”.

More footage will be provided from the Premiere, Grease Day and the Production. The release is rounded out by a Sing-Along and a Photo Gallery and the movie’s Theatrical Trailer in high definition.
”Grease” is the word yet again – this time in Blu – on May 24 when this release will hit stores for $29.99.