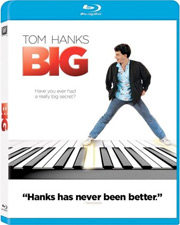 The previously announced Blu-ray release of Big from Fox now has some additional info on extras.

The film will be presented both in its theatrical and extended cuts with audio commentary. Eight deleted scenes, and the featurettes “Big” Beginnings, Chemistry of a Classic, The Work of Play, Hollywood Backstory: Bog and Carnival Party Newswrap will be included.