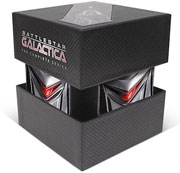 As Universal Home Entertainment is wrapping up the show, they have just unveiled the details about an upcoming box set featuring Battlestar Galactica: The Complete Series on both DVD and Blu-Ray Disc this summer.

The Battlestar Galactica saga began on one devastating day, when the human population of the Twelve Colonies of Kobol was annihilated in a series of surprise attacks by their own creation—the Cylons, a race of sentient robotic clones. The few survivors huddled together on space ships, facing almost certain death at the hands of their ruthless enemies. In Battlestar Galactica: Season 4.5, Commander William Adama (Emmy Award®-winner Edward James Olmos), the hawkish military leader of the last surviving battleship, searches for a habitable planet as the murderous Cylons follow relentlessly. As mysterious premonitions help Laura Roslin (Mary McDonnell) the President of the Twelve Colonies, guide the ship to the fabled Thirteenth Colony, Earth, treacherous double agents, Cylon spies and internal dissent plague the Galactica. The ship’s crew and passengers battle for their lives—and the survival of the human race—armed with only cunning and determination against the military might of the Cylon Empire.

The DVD version will feature anamorphic widescreen transfers of all of the show’s episodes, supplemented with Dolby Digital 5.1 audio.

No exact details about the bonus materials on this release have yet been announced but I am sure we can expect great things from this remarkable release.