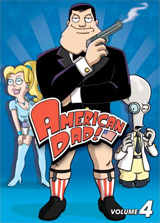 20th Century Fox Home Entertainment has just added American Dad: Volume 4 to their DVD line-up, scheduling the release for the end of this month.

C.I.A. weapons expert Stan Smith is back, keeping the homeland secure while alienating his family and terrorizing his neighbors in the process. Whether he’s saddling up for a mad cow cattle drive or destroying evidence of President Bush’s drunken debauchery, Stan does whatever it takes to ensure domestic tranquility and make the world safe for democracy of the ultra-right-wing variety! Join the Smith family and Roger, their alcoholic pet alien, for this hilarious Volume Four of American Dad. God Bless America!

The 3-disc DVD set will also contain a series of bonus materials, including Deleted Scenes and the Featurettes ”Tearjerker: And Then They Will Cry” and “Roger: Master of Disguise” as well as Comic-Con 2008 Footage.