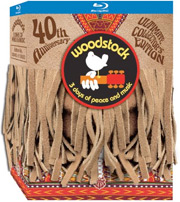 A three disc Blu-ray and DVD of the giant film Woodstock: 3 Days of Peace & Music help mark the film’s 40th anniversary thanks to Warner.

The film arrives as a directors cut (just topping 224 minutes) spread over two discs and will contain the featurettes The Museum at BethelWoods Untold Stores (featuring 18 unreleased performances) and From Festival to Feature. But the Blu-ray version goes further to include BD-Live content and the ability to “remix” your own lineup for the concert.

In all there are hours of viewing material on these sets. Look for peace, love and rock and roll to arrive at home on June 9th.