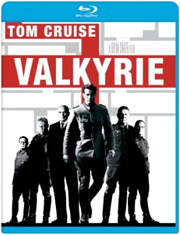 MGM Home Entertainment and 20th Century Fox will bring the WWII tale of Valkyrie to DVD and Blu-ray in May.

Based on the incredible true story of Colonel Claus von Stauffenberg (Cruise) and his ingenious assassination plot targeting Adolf Hitler, this engrossing thriller reenacts the daring operation to eliminate one of the most evil tyrants the world has ever known.

Three packages will be available for the film. The Blu-ray will contain several extras including Commentary Track with Tom Cruise, Christopher McQuarrie and Bryan Singer. For those who can’t get enough McQuarrie, there’s a second commentary with him and Nathan Alexander.

The release also contains the Featurettes The Journey to Valkyrie, The Road to Resistance: A Visual Guide, The African Front Sequence, Taking to the Air, Recreating Berlin, 92nd Street Y: and The Valkyrie Legacy. A Digital Copy is also included.