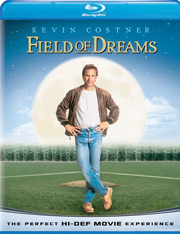 Universal Home Entertainment is shifting another number of titles that have previously been available on HD-DVD to Blu-Ray in order to close the gap in their catalog.

First up is Field Of Dreams, starring Kevin Costner. “If you build it, he will come.” With these words, Iowa farmer Ray Kinsella (Kevin Costner) is inspired by a voice he can’t ignore to pursue a dream he can hardly believe. Supported by his wife Annie (Amy Madigan), Ray begins the quest by turning his ordinary cornfield into a place where dreams can come true. A heartwarming experience that has moved critics and audiences like no other film of this generation, Field Of Dreams is a glowing tribute to all who dare to dream.

The release features a 1080p high definition transfer and supplements it with a DTS 5.1 HD Master Lossless Audio track. It also contains a Commentary Track by Director Phil Alden Robinson and Director of Photography John Lindley, a Scrapbook and a series of Featurettes, such as ”From Father to Son: Passing Along the Pastime”, :The Diamond in the Husks” and Galena, IL Pinch Hits for Chisholm, MN”. A Roundtable with Kevin Costner, Bret Saberhagen, George Brett and Johnny Bench is also included, as well as the Bravo Special: From Page to Screen and Deleted Scenes with Introductions by Phil Alden Robinson, and the Theatrical Trailer.