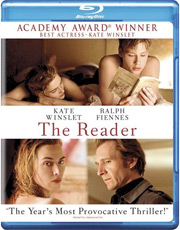 The Academy-Award winner The Reader has been added to Genius Products’ line-up, making its DVD and Blu-Ray Disc debut in April already.

The Reader, set in post-WWII Germany, follows teenager Michael Berg as he engages in a passionate but secretive affair with an older woman named Hanna (Kate Winslet). Eight years after Hanna’s disappearance, Michael is stunned to discover her again as she stands on trial for Nazi war crimes. The Reader is a haunting story about truth and reconciliation and how one generation comes to terms with the crimes of another.

Strangely, no details and specs have officially been announced yet but we will keep you posted as things develop.