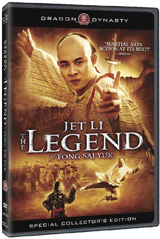 Genius Products has just added a DVD version of Corey Yuen’s 1993 martial arts drama The Legend Of Fong Sai-Yuk to their release line-up.

Jet Li stars as a carefree young martial arts expert who gets involved with a government official’s daughter just as he discovers his family is part of a rebel resistance movement.  While his fighting ability and charm made him a local champion, his epic battle for freedom will make him a legendary hero.

This Hong Kong Film Award winner will arrive in its original widescreen version with Dolby Digital audio tracks. As extras you will find a Commentary Track by Hong Kong Cinema Expert Bey Logan on the disc, as well as an Exclusive Interview with Writer Jeff Lau called ”The Pen Is Mightier Than The Sword”. Also included as an Interview Featurette with Director and Legendary Hollywood Fight Choreographer, Corey Yuen-Kwai, entitled ”Hit Hard & Fly High”.